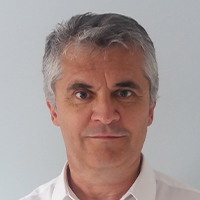 David Burland has worked in the voluntary sector since 1989 and started his involvement with the hospice movement in 1995 as Director of Marketing at Princess Alice Hospice in Esher. During his three and a half years there, voluntary income doubled and he launched a number of new initiatives including the hospice’s lottery.

He then spent 13 years at Help the Hospices, now known at Hospice UK. As Director of Income Generation his team increased income six-fold in seven years. He moved onto become Chief Operating Officer and then Deputy CEO, leading on engagement with member hospices in the latter role.

In 2012 he became CEO of Shooting Star Chase, a newly merged children’s hospice service. Whilst he was there both their hospices were accredited as ‘Outstanding’ by CQC and the hospice increased their range of services and numbers of children and families supported.

He is now a freelance consultant working with a range of voluntary sector clients on income generation, governance, stakeholder management and other projects.